The Insider guides went on a guided tour of the bunker complex in Zossen, which is situated one hour’s drive south of Berlin in the sleepy town of Buecherstadt Wünsdorf. The town has some interesting history: this is where Germany’s first mosque was built, opening in 1915 to serve as a place of worship for the Muslim prisoners captured during World War One. In March 1935 the Oberkommando Des Heeres (OKH), the High Command of the Army, located to Zossen. In 1938 the Oberkommando der Wehrmacht (OKW), the High Command of the Armed Forces, followed, also building their headquarters in Zossen. The German Olympic team even trained at the military sports complex in Zossen before the 1936 Summer Olympics. As part of the Potsdam Agreement after World War Two, military installations had to be dismantled, meaning many of the bunkers were destroyed by the Soviets in 1947. The location was of such strategic importance to the Soviets that they rebuilt and expanded the bunker complex during the Cold War.

You can only walk through the immense bunker complex as part of a guided tour.


The photo above shows how the bunkers look today, having been partially destroyed in 1947.
“Maybach 1”, as this bunker complex was known, was built between 1937 and 1939. What looked from the air to be a normal housing complex was actually twelve solidly built bunkers in which the OKW had their HQ during World War Two, and from which the OKW ran army operations throughout Europe, planning operations such as the invasion of the Soviet Union, codenamed “Operation Barbarossa”. This is also where members of the German resistance worked, including people such as Claus Schenk Graf von Stauffenberg and General Eduard Wagner, who plotted to assassinate Hitler.

The two photos above show the “Panzir” bunker, which was built in 1979 by the Soviets. Known as a “cut and cover” bunker, it is constructed in such a way that half the bunker lies above ground with the other half lying underground. It was used for communications and physical excercise for Soviet soldiers and officers.

This photo shows the entrance into the “Nickel” bunker, which was the most important Soviet communications bunker during the Cold War. It monitored and tracked all civilian and military aircraft flying over Western Europe and Scandinavia. This gave the Soviets valuable real-time data on Allied war planes. They had the information needed to decide upon a given action, whether that be a preemptive strike, or a counter-strike. When the Russians left this bunker in 1994, they took all their high-tech equipment with them, so that it didn’t fall into “enemy” hands.


The two photos above show us walking into the “Zeppelin/Ranet” bunker, which was built in 1937-39. It was the communications bunker and post office of the High Command of the German armed forces during World War Two. The bunker was manned around the clock. It was built 20m deep underground and during the Cold War the Soviets expanded the bunker to make it nuclear, biologically and chemically (NBC) protected from attacks. 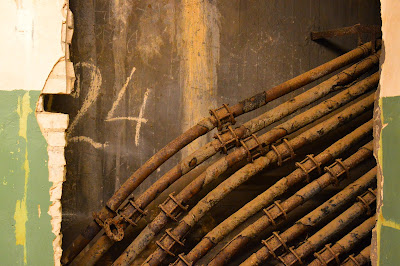 The last photo is of a section of the pneumatic post system used in the Nazi complex to link Maybach 1, Maybach 2 and the Zeppelin bunker. The cylinders put in these tubes reached a speed of 9m per second, providing a secure means of communicating rapidly between the various operational bunkers of the OKW.

We thoroughly enjoyed our tour through the bunker complex in Wünsdorf, and would recommend the tour to visitors to Berlin as a potential day trip out of the city.
It is easy to get to Zossen by train or with a private vehicle. For further information, you can visit their website here: