mumpitz, mountains and surviving the Berlin winter, with Michael 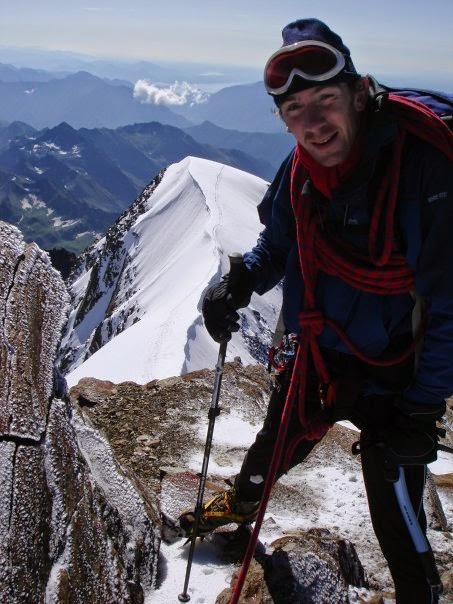 Originally from London, Michael became addicted to the history of ‘the definitive 20th century city’ - Berlin. This complimented with two years training as an actor brought Michael to tour guiding. How and when did you move to Berlin though? Did you visit much before you took the plunge?

It was in July, 2008 that I forsook my island home and travelled across the sea, from the port of Harwich to the Hook of Holland, to The Continent. Although the overnight crossing was more expensive than a flight in both time and money, the sea journey felt more dramatic and final. I was also carrying the rest of my life with me and there was no weight restriction on board ship.
Dare it be said? I had tired of London. Struggling to meet my rent, to pay for that second pint, to get around the edge of my bed in my too small bedroom, also well into my thirties without having found traction in my life and tiring of London’s frenetic pace, I left.
I had thought of Italy, Basilicata or Calabria, where the sun shines and where the women are said to be very beautiful. I thought I might teach English there, as I had in London. As it happens though I met a beautiful woman in London, a German, who lured me to her native land instead.
I lived in Munich at first, because the mountains are near and my parents live there. They are EU migrants like me. However, my woman, Katja, could not find work in her line in southern Germany and so we were separated. I became despondent because I am a social animal and I was soon bored of Munich and lonely.
I had visited Berlin a number of times in the autumn and winter and didn’t really like it, but I missed Katja and decided that I had nothing to lose by moving north. To my great surprise and hers, Katja suggested we live together and find a flat to rent. I tried to play it cool but jumped at the chance.
We have been living together in Berlin for six years now, and have since been joined by two other Germans, Berliners indeed, our cats Polly and Franzi.


You are an avid climber. What do you think of Berlin's city climbing options? Have you ever climbed Humbolthain?


I am a below average rock climber in my spare time. I like to justify my poor performance on rock by seeing myself as an all-rounder, a mountaineer who can also ski and climb ice, albeit rather clumsily. However, Berlin’s geology presents the climber with a problem because Berlin is built on sand. About 16000 years ago and during the last Ice Age, a 1 kilometre high ice sheet (3 times the height of Berlin’s T.V. Tower) pushed through the Urstromtal flattening everything that was not flat already. Eventually the ice began to melt and was in retreat. The meltwater from that thaw is effectively today’s groundwater, on average just 3 meters or so below the surface. Inbetween us and the water is the glacial silt or sand that was groundup and pushed about by the ice sheet.
So there is no rock for the rock climbers to climb. We make do with concrete boulders as at Volkspark Friedrichshain, the Magic Mountain climbing hall at Gesundbrunnen or the new German Alpine Club members’ hall near the main railway station. There are more surprising venues such as the north face of a former flak tower used for air defence in WWII in Humboldthain, but I find the routes too hard there.


Speaking of high places, what is you favourite vantage point in Berlin?


My favourite vantage point in Berlin is from my bed with a cup of tea with the curtains opened on a beautiful clear blue sky. Another was within a particular café with a view of a particular waitress. Of more practical interest to the reader might be the canteen of the Federal Ministry of Defence. This has an expansive view of the Tiergarten park, the Reichstag, the Victory Column, Potsdamer Platz et al. The canteen is open to the public at lunchtime from 1pm and from Monday to Friday. It is also very, very reasonably priced and is in the same building as the German Resistance Memorial and exhibition.

The city is petitioning to host the the 2024 or 2028 Olympics. What is your opinion on this matter?

Berlin should not seek (with Hamburg) to host the Olympics. First, Germany does quite well enough at sport already without making an extra effort. After all, they’ve just won the football World Cup again, what more do they want? Second, neither Berlin nor Hamburg are very good at managing big projects at the moment. Witness Hamburg’s Elbe Philharmonie fiasco, the debacle of Berlin’s restoration of the Staatsoper Unter den Linden and the scandal of the still unopened Berlin International Airport. Unless there are absolutely watertight proposals for an enduring economic benefit, and Berliners would take a great deal of convincing, it is too risky a venture for a city that has about 60 billion Euros of debt. Still it would be good for us tour guides wouldn’t it?

On a lighter note, can you recommend some tactics for getting through these (last, hopefully!) months of winter?

A sure fire way of getting through a Berlin winter is to leave now and then. Otherwise wear everything when outside and later hunker down with friends over meat and potatoes. Of course, during Advent and the Christmas season there is hot sweet wine (Glühwein) which is an essential at the Christmas markets. And the winter can be embraced with a spot of ice skating or such. Actually, it might even take counselling which saw me through the winter before last. Another good option are the saunas and spas in and around Berlin, but beware the Germans take all of their clothes of in such places and it is expected that you do the same. Well if you can’t beat them, join them!

As a perpetual German language student myself, sometimes it is necessary to come at the challenge with a bit of humour.  What is your favourite German word?

My favourite German word changes from time to time. For some reason or none I used to keep using the term ‘genau’ (exactly) when speaking German. My favourite word for a considerable time now is ‘mumpitz’ (nonsense) which appeals to me because I have a taste for mompitz anyway and it is even quite a fun, silly word to hear and say.

Well then, thank you Michael, for all the practical, entertaining and purely nonsensical bits of this interview!
Posted by Insider Tour at 05:32 3 comments:

industrial Rock and the fourth Wall with Maria 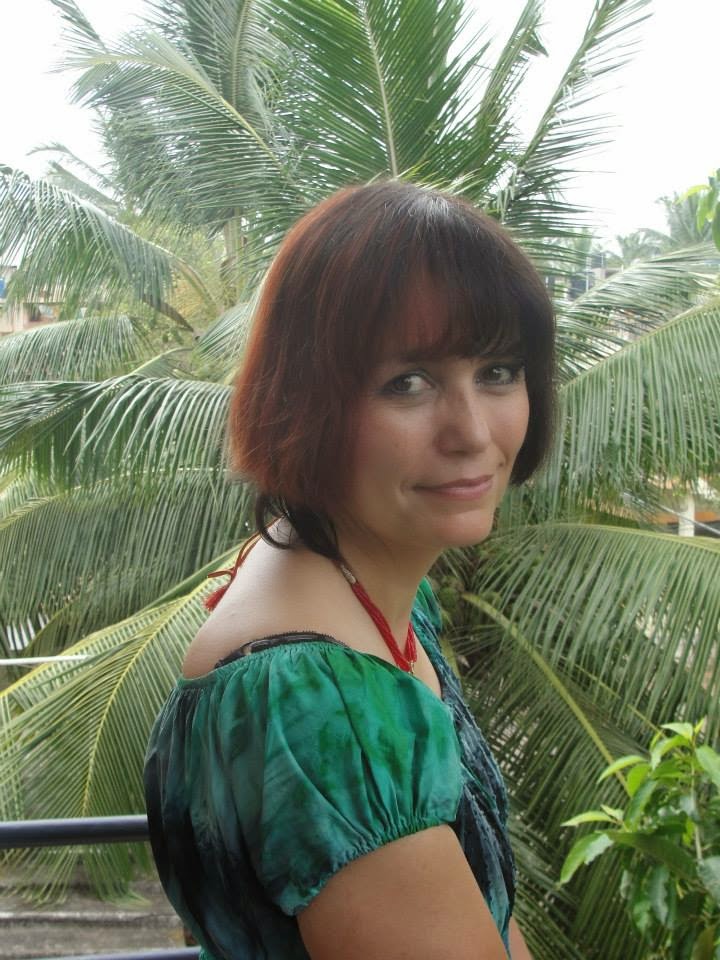 Maria, half Swedish and half Japanese, was brought up in Sweden.  At a young age she became restless and went to Paris and Milan to pursue modelling work, and then onto London to study drama.

How and why did you move to Berlin?  What was your first impression of the city?

I was always fascinated by Berlin and it’s dark history. When I lived in London, I didn’t have any money so I used to stay at home and watch History channel, which might as well be called World War II channel. My situation there was getting quite unbearable. Because of my Theatre work I had managed to amass huge debts. To survive I had about 3-4 different jobs. I was working early mornings at Heathrow Airport with security and customer service, guided tourists, promotion work and wrote some articles for a Swedish Rock magazine.
It was my interest in German heavy industrial Rock that brought me to Berlin.

The magazine I used to work for got me an interview with the drummer in Rammstein so I came over here to report on them. I just fell in love with the city. Never had I been to such a unique place. It is like it is newborn. Constantly changing and growing out of the ruins from the 20th century. You never get bored here. There is always something going on, it’s vibrant and creative. I returned several times and for awhile I was almost commuting from London. My situation there was getting worse so after awhile I thought: It’s time for a change and it’s in the EU so I can work there and make a fresh start. During my visits I had also met a guitar player who turned out to be a jerk but love is blind. After a few years I realised but my love for the city remained.

You studied theatre and worked as an actress. Do you attend much theatre in Berlin? Do you have a favourite venue?

I am ashamed to admit that I haven’t been as much to the Theatre as I would like to. My music interest has taken over and I am writing for another Swedish magazine now, Slavestate. All my free time is being taken up with attending Rock festivals and gigs. When I first arrived I went to the Berliner Ensemble and I also went to some smaller youth theatres because friends were performing there. My favourite venue is still the Berliner Ensemble because of the quality of their work.

You travelled a lot before settling in Berlin, and still do travel a considerable amount. What has kept you in Berlin?

Travelling is my life and I usually get a bit restless when I stay in the same place for too long. I still travel but I think Berlin will be my base from now on. The place doesn’t feel stagnant and there is so much life here. What kept me here is the creative scene and the energy of it. The city is cheaper than most western capitals and because of this, people can afford to express themselves. Other big cities have become so expensive and money oriented, that all people do is running around trying to stay afloat. Here it is not so important to have a car or a flatscreen TV which makes it feel so more relaxed.

Your knowledge of the city is really impressive. Do you have a specific story or figure from Berlin history that has inspired you?

The 1920’s before the Nazi’s came to power, when the city went through an unprecedented wave of creativity and decadence is my favourite era. My inspiration is the playwright Bertolt Brecht. His concept of the epic Theatre that broke down the fourth wall towards the audience was a new and brave concept. The style and music by Kurt Weil made his plays into a unique experience. My very first Theatre experience was Brecht’s “The Good Person of Szechwan”. I think I was only 9 years old and it blew me away! I was so impressed with how you could tell such an engaging story in such an abstract way that I decided to become an actress. Then I saw “Cabaret” when I was twelve and my obsession with Berlin started seriously. Unfortunately it took me a long time before I got here but I am so glad I finally did and I think I am staying.

Posted by Insider Tour at 05:22 No comments: