through time and space with JJ 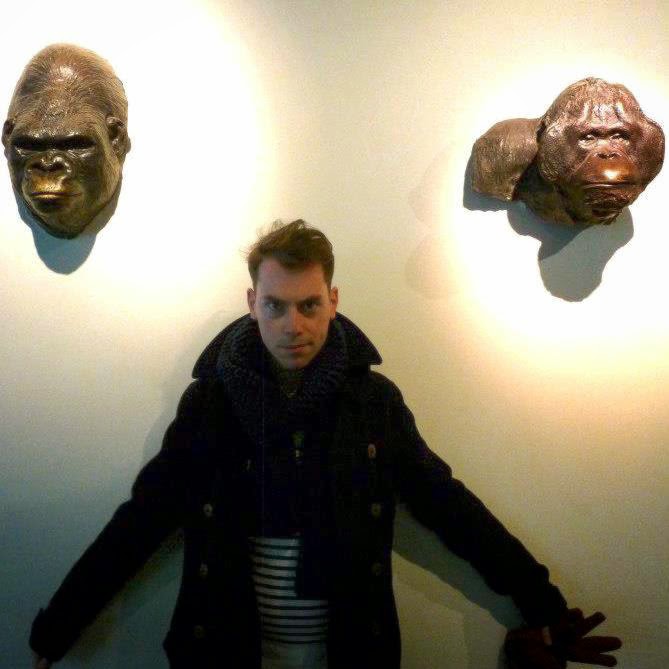 JJ, a native of Cork City, Ireland, arrived in Berlin armed with a curiosity about curry-wurst and an MBS in politics and history. A self confessed Berlin addict, John infuses his tours with his intense passion for German history and culture, while employing his inimitable brand of humour to weave the story of Berlin in the great Irish tradition.  How and when did you first come to this city JJ?

I first visited Berlin in the late autumn of 2006, a callow and impressionable youth searching for the city of his dreams. Being an aficionado of David Bowie’s work (he recorded some of his finestwork in the city) I expected to love the city, but I wasn’t ready for the overwhelming experience. I wish I could tell you more about the visit but I literally wandered around in a dream like state, stumbling from one historic location to another, allowing the years of history to wash over me. It sounds so ridiculous now, but visiting Berlin was like a pilgrimage for me, just to follow in the footsteps of Max Liebermann, Mies van der Rohe, and Fritz Lang was a thrill. I have vague memories of seeing the Pergamon Altar and buying an Ampelmann mug, but beyond that it’s more a feeling than a specific set of memories. My experiences must have been positive because I jumped at the chance to move here in May of 2011. I was presented with an impossibly long list of cities by a university professor who insisted that I needed some experience “in the field”. I dutifully narrowed the list down to Berlin and Stockholm, but in reality there was only one real contender. This is where my Berlin odyssey truly began and when my turbulent love affair with the city started. Like any relationship we go through peaks and troughs together but the romance continues to blossom.

With your masters in politics, can you discuss a bit about Berlin's uniqueness in terms of a capitol city.
From an academic point of view I could coldly and rationally put forward any number of completely valid arguments for why Berlin is unique amongst European capitals. From the geopolitical point of view I would be sympathetic to Otto von Bismarck’s opinion that Berlin’s position at the crossroads of the continent has had an enduring impact. We could also look at Berlin’s unusual and sometimes difficult journey to becoming the capital of the German Empire at the end of the Franco-Prussian War. Then we arrive at the 20th century, where we have the destruction and rebirth of the city and the small matter of the Wall. West Berlin became a refuge for young German men and women escaping the stuffy atmosphere of post-war West Germany, a safe haven from military service, and an oasis for artists from allover the globe. Finally we arrive at the post-Wall era, something we are still coming to terms with. The spectacular collision of east and west and the relatively smooth transition to a united Berlin contribute an enormous amount to the city uniqueness.
Beyond the academic analysis we have to appreciate another less tangible factor. Berlin has something special, an almost mystical quality that sets it apart from the rest. The city is like a mirror that reflects the dreams of the people who live here, although it has reflected its fair share of nightmares too. When I first arrived in Berlin I met an incredible man at a language exchange who was supposed to be helping me to improve my German but ending up regaling me with stories from his experiences in Berlin over the course of 40 years. He told that the only constant in Berlin’s is change – the city constantly renews itself; expecting Berlin to stand still is akin to standing on the shore line as the tide advances and screaming at it to turn back. Change is Berlin’s most enduring and alluring quality, and adds much to its unique character.

You're a street art fan.  Did this grow out of living in Berlin?  Do you have a favourite local street artist, or location to find new pieces? 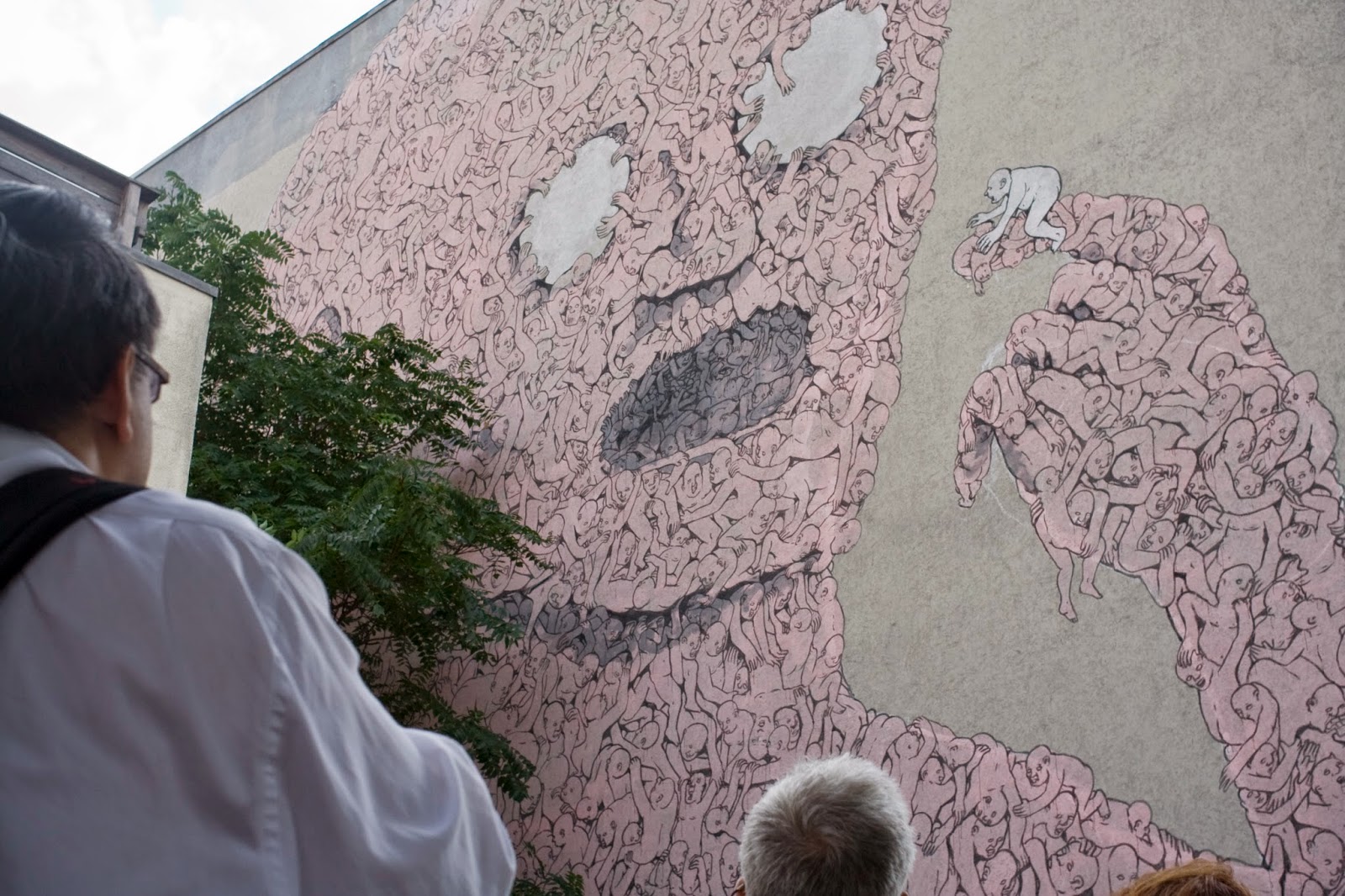 Simply put, Berlin and street art are a match made in heaven. Before arriving in Berlin I would have been quite dubious about the artistic merits of street art, but I quickly learned to love the micro-galleries that populate Berlin’s doorways and alleys. Street art’s raison d'être is its temporary nature and Berlin’s street artists have embraced the mediums fleeting lifespan. Whether it’s a wall-sized mural, a poster, or a piece of graffiti, street art fits perfectly with Berlin’s chameleon spirit. When the wall fell, vast swathes of the relatively underdeveloped east were opened to eager artists searching for wall space. When you add the laissez faire attitude to graffiti in the former western neighbourhoods of Kreuzberg and Neukoelln, you have a city that is too tempting for the world’s most prominent artists to ignore.
Street art (in the loosest sense) is not a recent phenomenon in the city; in fact Berlin’s first street artist was probably Ernst Ludwig Kirchner who painted pictures of the city’s streets rather than putting paint on the city’s streets. Kirchner was one of the key figures of the Die Brueke movement and his “Großstadtbilder” series documented the city’s bustling neighbourhoods during an audacious age – for example his viciously angular painting of Nollendorf Platz in 1912 for example captures the chaos perfectly.


Today Berlin’s street art crews, such as 1UP (One United Power) and the precocious UberFresh Crew (often stylised as ÜF) have dragged the street art phenomenon into previously uncharted territory. They carry out their unique vision for Berlin’s streets with a political undercurrent and a dose of renegade ferocity. Whether it’s entertaining or humorous, thought provoking or disposable, street art has become interwoven into the DNA of the city.

Naturally Warschauer Strasse, Schlesisches Tor, Gorlitzer Bahnhof and the nearby streets are essential destinations for anybody looking for an introduction to the variety of art on Berlin’s streets. Space is at a premium and each and every door way artists clambering playfully for a place for expression. Mitte is also a well established area for street artists, particularly Haus Schwarzenberg near Hackescher Markt. Here you can find some of Berlin’s most respected artists displaying their work within a few square meters of each other. In the city we have some incredible pieces by internationally renowned artists, but my personal favourites are the ones I associate most with Berlin. Take for example the tiny cork figures striking theatrical yoga poses that adorn the city’slampposts and street signs, or the eccentric sixes that crop up in increasingly bizarre locations. There are two Berlin based artists that work under the name Various & Gould who have created a series titled “Sankt Nimmerlein” which is a big favourite of mine. The poster series sought to create ten modern saints for modern day problems that are based on the “Fourteen Holy Helpers” of the 2nd and 3rd century. The posters, which are dotted around the city, mix the surreal with biting social commentary; truly art to get excited about. Of course I have to mention one of Berlin’s most prolific artists El Bocho; even those with a passing interest in street art are familiar with his “Little Lucy” posters, where the aforementioned Lucy is seen to torture her long suffering kitty in ever more outlandish and stomach churning ways.


Do you make any form of art yourself?
There’s a good reason why you’ve never heard of my art. It could be that like all the best street artists I guard my privacy obsessively, or it could just be that I realised at an early age that my abstract expressionist knock-offs were pedestrian at best. I’ll let you decide!

As we enter the depths of the Berlin winter, do you have any tactics for surviving these long grey months?
When I experienced my first Berlin winter a few years ago, I just hibernated in a warm room and waited for the winter to pass. “How long can the cold weather last?” - I asked myself with an almost childlike innocence. Cue to four months later, with the snow continuing to fall and the temperatures plummeting, I was close to breaking point. The next winter I was inspired by the older generation of Berliners to ignore the bleak weather and carry on as though this was merely a mild inconvenience. Many times I have watched in admiration as they huddle together in the doorway of a train station, before clutching their shopping bags tight and gritting their teeth, they stride with steely determination against the cruel Siberian winds. These people are made of tougher stuff. For the last couple of years I have chosen winter as a season for exploring the city. Too often I get locked in my own “kiez” mentality, so it’s a pleasure to discover some hidden gems. These quests to pastures new often begin with looking at the city map and picking a train station at random. This city is full of surprises; I recently discovered a fantastic Viennese café in Dahlem!

We shall follow your cue and take to the streets, thanks JJ!
Posted by Insider Tour at 04:44 No comments: