Alex is new to the Insider team bringing with her a burst of fresh energy.  It is quite endearing to see the weekly wave of reviews flow into Tripadvisor following her tours to Dresden.  Guests gush with gratitude for both her knowledge and attentiveness.  Her passion stems from the rich musical history of both Berlin and Dresden.  You see, the city itself did not win her over so quickly...

I first visited Berlin in 2010 when I was an exchange student at the Universität Koblenz-Landau. We took the train to Berlin as part of a school trip and it was terrible. Early on I was hit by a cyclist and my camera was smashed, the woman leading our group made a point of directing my attention to EVERY SINGLE monument to a Jewish person/place/event that has ever been in this city (fascinating, but was information dumping at its finest) and I was constantly told off for being too loud... Honestly not a good impression. I knew nothing about Berlin, had no expectations, but genuinely didn't enjoy my first time. I think that was what surprised me the most. Thankfully, my tastes have matured and I now appreciate Berlin for the wonderful city it is today.


A relic of former East Berlin that is quite notorious is an abandoned amusement park in the middle of the vast Treptower Park.  It has become something of a pilgrimage destination for residents and visitors alike.  Alex has her own special relationship with this location.

A bit of Spreepark burnt down recently and that's made me quite sad.  I lived around there so while I was writing my history honours thesis last year it was a kind of happy place; an incredibly creepy sanctuary far away from the Tamburini Riot and discussions of elite British culture where I could amuse myself with thoughts of how terrifying most children probably found the amusement park.

Though Alex does not only write about opera, she is a singer herself which keeps her very busy when not guiding...
I sing and study.  Right now I'm attempting to learn as many roles and songs as possible so I can be the greatest Wagnerian soprano to have ever graced the stage.  I am also studying a masters of global history at the Free University and Humboldt University so I can contextualise my greatness!

For the time being Alex is quickly becoming known for her superb tour of Dresden.  The city is less then three hours away from Berlin, just a hop, skip and a jump really.  Making that round-trip weekly means becoming familiar with some fairly random sites along the way though.

We pass much of interest between Berlin and Dresden, but something I love is the Tropical Islands. Housed in the largest free standing hall in the world, the Tropical Islands is a resort/rainforest complex in the middle of nowhere. The site itself was used by the Luftwaffe from 1938-1945 as a military airfield for the Brand-Guben pilot training school and later front line operations, before being occupied by the Soviets from 1945 who used it as a military air base. Post-reunification the site was abandoned and used for waste disposal, until in 2000, the giant dome was build with the intention of creating airships. This project failed so they turned it into a swimming pool. Naturally.

Just like Brian, Alex can not deny the importance of The Threepenny Opera in connection to Berlin.  With three opera houses the city offers a multitute of inspiration.

Really, the work I associate right now with Berlin is Dostal's operetta 'Clivia' because I'm still blown away by the Komische Oper's production this year. AMAZING. My life was changed that night.

Well there you have it!  Is there a better place to end then with a life changing experience?
Posted by Insider Tour at 07:15 No comments:

the one and only Brian

I caught up with Brian after his 2014 season of guiding.  The man has quite a reputation, and having been on his Famous Walk tour, I will say, I did indeed both laugh and cry by the end.  If you are in Berlin during the summer months do not miss the chance to jump on his tour, he will open your heart to Berlin! 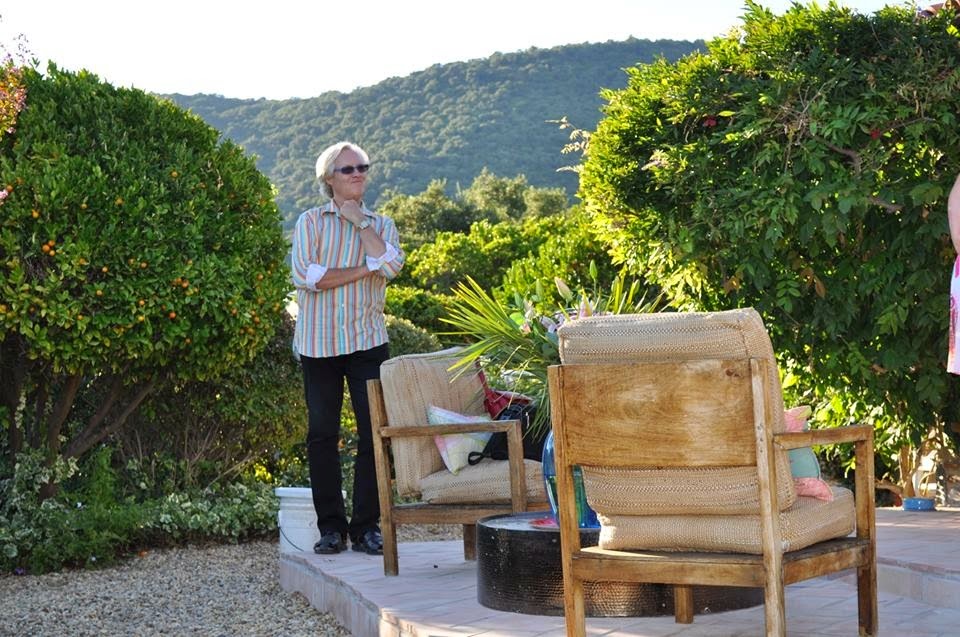 I asked Brian about his first experience with this city.  He answered in all capitals.  I think this is an expression of enthusiasm for his adopted home, so I left it as so...

SHOCKING AS IT IS TO REALIZE, I RECENTLY DID THE CALCULATIONS AND FIGURED OUT THAT I FIRST CAME TO BERLIN IN THE EARLY SUMMER OF 1994...YIKES.  I HAD BEEN STUDYING DOWN IN THE BLACK FOREST, AND CAME TO BERLIN FOR A COUPLE OF DAYS, LIKE EVERYONE DOES,  TO BE ABLE TO STRIKE ONE MORE CITY OFF OF MY "PLACES TO VISIT" LIST.  LITTLE DID I KNOW THAT THOSE FEW DAYS WOULD TURN INTO A ENDURING LOVE AFFAIR WITH THIS EXTRAORDINARY TOWN.  BERLIN STARTED TO SPEAK TO ME ON THAT VERY FIRST MORNING, AND SHE HAS NEVER SHUT UP!

Berlin is known for its continual and fast paced transformation, for better or for worse.  One often has the experience of walking down a street after a few months and finding a new glass and steel construction, a garden where an empty lot once was, or a building block were a favorite park had been.  I asked Brian about locations which he has seen change during his years here.

IT'S EASY TO WAX ELOQUENT ABOUT "THE GOOD OLD DAYS", BUT IT'S SO MUCH MORE IMPORTANT THAT WE TRY TO LIVE IN THE MOMENT, IN THE PRESENT.  THAT SAID, IT STILL BREAKS MY HEART TO WALK PAST THE INCREASINGLY INACCESSIBLE, INVISIBLE AND SOON-TO-BE-FORGOTTEN TACHELES.  I BEMOAN THE SHODDINESS OF WHAT CHECKPOINT CHARLIE HAS BECOME: TO MY WAY OF THINKING, IT'S A HISTORICAL SITE THAT DESERVED MUCH BETTER TREATMENT.  AND OF COURSE, I YEARN FOR THEM TO FIIIIIIINALLY COMPLETE THE RENOVATIONS TO THE STAATSOPER, AND TO FINALLY GET THE DARNED PLACE OPEN AGAIN.

Those who have joined Brain's tour know that it ends with beers at Cafe Cinema.  I offered him the opportunity to invite any former Berliner for a talk..

WHAT SPRINGS TO MIND WOULD BE TO SIT DOWN WITH ONE OF THE MONSTERS OF BERLIN'S MID-TWENTIETH CENTURY, AND SIMPLY ASK THEM "WHY"?  BUT I REALLY DON'T FEEL THAT I WOULD BE EMOTIONALLY, OR PERHAPS INTELLECTUALLY, CAPABLE OF DEALING WITH ANSWER THAT MIGHT COME BACK TO ME.  SO INSTEAD, I'LL JUST SAY THAT I'D LOVE TO MEET MY "GREAT GREAT AUNT", MARLENE DIETRICH, IN THE ALLEY BEHIND CINEMA CAFE, TO BE ABLE TO BUY HER A HEFEWEIZEN, AND ASK HER IF SHE'D SING FOR ME.


Brian splits his time between Berlin and the rest of the world as an opera director, his thoughts on bridging his work...

IT BREAKS MY TINY LITTLE FIST OF A HEART TO USUALLY BE ON THE OTHER SIDE OF THE ATLANTIC FROM EARLY SEPTEMBER TO THE END OF EVERY JUNE, BUT THAT'S THE LIFE OF THE ITINERANT THEATER AND OPERA DIRECTOR...YA GOTTA GO WHERE THE WORK IS!  I'VE GOT A FULL SEASON OF WORK BACK IN CANADA AND THE US, EVERYTHING FROM GILBERT AND SULLIVAN TO DONIZETTI, BUT THE PROJECT THAT EXCITES ME THE MOST IS DIRECTLY RELATED TO BERLIN. THIS YEAR, I'LL BE DIRECTING MY VERY FIRST PRODUCTION OF BRECHT AND WEILL'S THREEPENNY OPERA, A MASTERPIECE THAT HAD ITS PREMIERE RIGHT HERE IN BERLIN ON THE 31ST OF AUGUST, 1928!  EVERY TIME I TAKE A TOUR PAST THE SCHIFFBAUERDAMM THEATER ON FRIEDRICHSTRASSE, I MAKE SURE THE FOLKS KNOW ABOUT THE HISTORY OF THE THEATER...WHETHER THEY LIKE IT OR NOT!


And when he must leave, what does he stock up on for the rest of the year??!

IT SOUNDS PRETTY BANAL, BUT MY FAVORITE TOOTHPASTE AND DEODORANT IN THE WORLD HAVE TO BE BOUGHT IN GERMANY.   OKAY OKAY, AND I ALWAYS HAVE TO TAKE ALONG A COUPLE OF BAGS OF GUMMIBEARS!

Thoughts on your annual departure?

EVEN BEFORE I LEAVE BERLIN AT THE END OF THE SUMMER, I CAN ALREADY FEEL THE YEARNING TO GET BACK AS SOON AS I CAN.   CAN'T WAIT FOR THE FINAL SHOW TO CLOSE AT THE END OF NEXT JUNE!

With that, we too anxiously await Brian's return.

Posted by Insider Tour at 05:53 No comments: