A fresh face, chatting with Phil 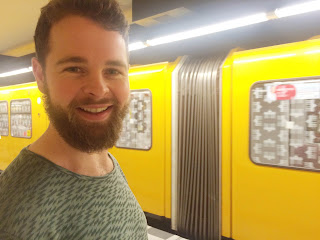 Our newest team member Phil was born in Dublin in 1989 and spent the 90s pursuing a soccer career which never quite materialised.  Turning to books he studied history with a particular focus on 16th century Ireland.  This in turn inspired the search for exotic escapes, Argentina, Japan, the travel seed was planted.  Phil finished his degree in Melbourne but found the incessant sunshine and general sense of optimism crushingly at odds with the Irish spirit.  In this light, Berlin seems an appropriate place for Phil to have settled down, for the time being as least...


With winter approaching, what are your plans, the to-do-list of getting acquainted with Berlin during its long, dark months?

Surviving is high on that list. This will be my first winter in Berlin and I've been told to prepare for something quite grim and cold, but having moved from Ireland I'm surely well suited, they are two of our main exports. A fact which may explain the current imbalance in relations between our two countries. Another priority during those long dark winter months is staying active. The tendency at this time of year is to over consume- in all areas- and do less but it's something I'm keen to avoid. If for no other reason than I'll quickly take on the physical appearance of a melted candle.

Aside from those two relatively unambitious goals, I really want to immerse myself in the language by taking courses. In school I had the option to study Spanish or German. As I was deciding which, I vividly remember uttering the words 'I'll never live in Germany', before going with Spanish! Berlin is also a centre of ideas and I'd like to become more acquainted with some of the groups that organise and campaign for alternative solutions to some of the big issues of the day. Before I left home I was becoming a bit more politically conscious and engaged and I'd like to continue down that path, in a city of enormous importance.


It seems we have a few rock climbers on our team.  Brandenburg is not really known for its mountains though.  How is your new home treating you in terms of this hobby?  Have you explored any of the urban climbing centres in Berlin, or have you found some free climbing locations?

What Berlin lacks in 8000m peaks, it more than makes up for in 8000mm teaks. Actually, they're tropical and not native to Berlin so that doesn't quite work, for lots of reasons but the backspace on my keyboard is broken so it stays. No, this is not the place for climbers! I have sampled some of the indoor walls the city has to offer but the real satisfaction has always been that time in the outdoors. A beautiful setting, good company, a rope, some (climbing) gear and a crag. The fulfilment at the end of a day on the hills is impossible to get at an indoor wall, sadly! In every other facet of life Berlin is immensely satisfying but that is one void I've yet to fill. Unless there is an undiscovered fault line running under the city it's likely to always remain very flat, certainly for the duration of my stay here. I've made my peace with that. 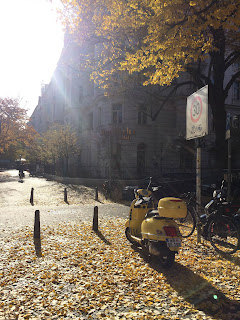 May I probe the subject of how you ended up moving to Berlin anyway?  How does one working in a museum in Dublin come about a life opportunity in Germany?  Are you enjoying working outdoors, touring through the city as a living museum?

I moved to Berlin for a woman. Very cliché, isn't it? While in Dublin I met a student of Humboldt University doing her internship and here I am. Ira is originally Siberian, a fact which bemused my mother who thought only bears and wolves live there. We were quite fortunate finding an apartment and are nicely settled in leafy Wilmersdorf. I've usually lived in places next to cars propped up on bricks and areas filled with hooded youths masquerading as urban jedis so this has been an interesting change of scenery. Berlin's parks are wonderful and I'm right next to one with lots of ping pong tables and plenty of other facilities. Those small details make a huge difference. Walking through the city on a daily basis, I'm always amazed how much it's been through, a living museum, like you say. Everyday I feel like I'm discovering and understanding more, bit by bit, day by day. I can't think of a better way to gain that understanding than leading others through the city.

Many of our guides have commented on the spirit of Berlin, its freedom and creativity and general vibe of nonconformity.  I just discovered an illustrator who visualises those quirks which make Berlin so unique, those things that perhaps become 'normal' after a few years, but are definitely not the norm beyond the city limits.  With you having moved here fairly recently, can you share with us one of those moments where you thought, 'ahhh this is beautiful and strange and it only could happen in Berlin'.  I think you know what I mean, If not, call me crazy and skip the question!

Yes! There have been so many of those moments that only feel possible in this city. The one that leaps to mind happened very soon after moving here. Myself and Ira were wandering around Ostkreuz and stumbled upon a protest around the issue of housing on the grounds of an old derelict, abandoned warehouse. An interesting collection of individuals and groups in attendance- anarchists, environmentalists and so on. It was all very typical and standard but just as it appeared to be coming to an end a convoy of trucks pulled up and the protest hit the streets. Huge numbers joined in as they crawled along the busy roads while pumping techno music from enormous speakers which were mounted on top! The atmosphere was incredible and it felt absolutely unique to Berlin. Definitely one of those moments when I felt privileged to live in such a weird and wonderful place.

Your enthusiasm is contagious Phil, thank you!
Posted by Insider Tour at 03:26 No comments: