During one of our strolls through Berlin’s interesting, diverse landscapes we went to discover Schönholzer Heide in the district of Pankow. This park was initially created for Queen Elisabeth Christine, wife of Frederich the Great, in the middle of the 18th century. During World War II there was a bunker complex built in the park, some of which were used by civilians during the bombings raids on Berlin in the 1940’s. During this time the park was also the location of Berlin’s second biggest ‘Zwangsarbeiter’ camp (forced labour camp). The majority of these forced labourers were foreign prisoners from Nazi occupied countries. After the Berlin Wall was built in 1961 the park was just inside the East Berlin border wall. Since the fall of the Wall in 1989 the park is now accessible to all Berliners and visitors.

Our primary objectives on this excursion was to pay our respects at the Soviet Memorial, find the oldest remaining section of the Wall still standing, locate the bunkers and look for Cemetery 6.

This is the oldest existing piece of the Berlin Wall. This section is just over 80m in length. It was forgotten about after the Wall came down, only to be ‘rediscovered’ a few years ago. It is the original, first generation brick wall from 1961, built using bricks from buildings that had been destroyed during the war!

We found the first bunker we were looking for. There was a lot of concrete and remnants from the bunker complex strewn around this portion of the park. 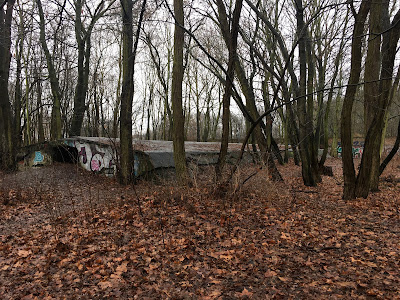 This bunker complex was built for civilians in World War II. It was named the Luna bunker because the old name of the park was Luna Park. Today this relic left over from World War II is covered in graffiti. With our torch we looked in to the bunker where you can still clearly see the interior rooms.

This cemetery remains somewhat a mystery. It is unkept and quiet overgrown. It is thought that either forced labourers, and/or civilians killed during bombing raids, or during the ensuing chaos of the Battle of Berlin, are buried here. Not to be mistaken for the orderly and well-maintained cemetery nearby which is filled almost exclusively with bombing raid victims from the Spring of ‘45, cemetery 6 is unkept and has no railing, gate or signage. Only for some gravestones, mainly from the 70’s, in the undergrowth one would not know that this was a graveyard at all. It is thought that the headstones from the 70’s and 80’s were descendants of those buried in the unmarked cemetery 6. This little-known and not well documented site is worthy of further investigation and remembrance.

Next we went to pay our respects to the fallen Soviet soldiers who died in the Battle for Berlin. This is the largest Soviet cemetery in Europe outside of Russia. An estimated 13.200 soldiers are buried here. It is the 3rd largest Soviet memorial in Berlin. Around the memorial inner wall you can see 100 bronze panels. Written on these bronze panels are the names of some of the fallen soldiers buried here, only 20% of whom could be identified. A very moving memorial and well worth a visit when you are in Berlin.